Get fresh music recommendations delivered to your inbox every Friday.

from EASY LIFE by CHRIS BUTLER 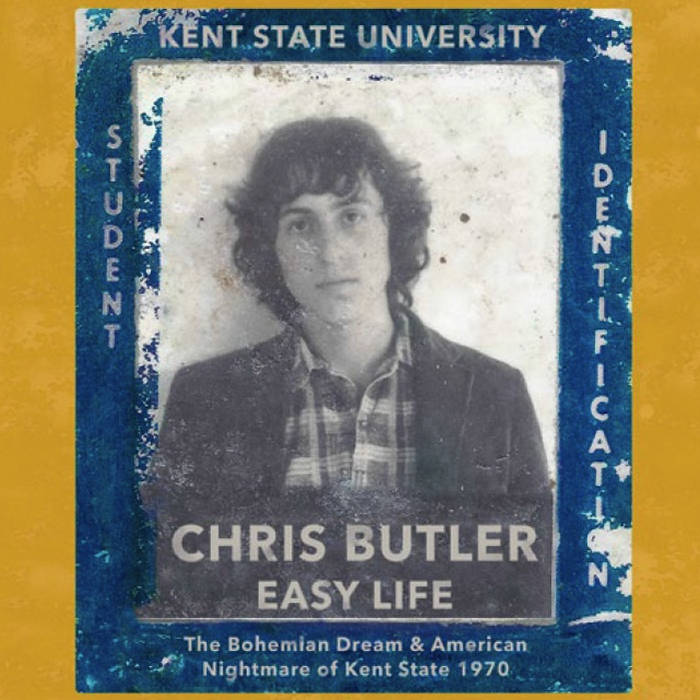 Intro to The Guitar Solo

What a Short, Bad Trip It Was

BEGGAR'S BULLETS
(CAPTAIN TRIPS BUMS CLEVO or WHAT A SHORT DULL TRIP IT WAS)
...there are no accidents

holster that fist, boy
ummmm...that's what I used to say
back in the days when I had words and reason
in my armory

gone ... all gone ... wasted now
outgunned ... arrested
my words netted in their newspapers
reason bounced off their helmets

new history
plotted out in poverty and silence
you know we have to ...
they took away our drums

every window is my enemy's eye
every rock is a beggar's bullet
and when I bring the two together
it's my turn, my time, this street is my state

I am riot
not just some whiner
with a city's worth of sidewalks now
stacked in my armory.
and I'm a poet
I rhyme in cobblestone granite
the art of the instant arc
my only ideology

and every window ... my manifesto
every rock ... a beggar's bullet
when I bring the two together
it's my turn, my time, this street is my state

into your living rooms.
'round the corner of Tank and Bayonet
down all your lovely boulevards
now draped in gas and barricade

am I senseless? no!
exhilarated? absolutely!
'cause one thing that's for sure
I'm not a victim anymore

and every rock is a beggar's bullet
when I bring the two together
it's my turn, my time, this street is my state

(CAPTAIN TRIPS BUMS CLEVO or WHAT A SHORT DULL TRIP IT WAS)
...there are no accidents

"i had all their records. i had all their records and i'd played them so many times i'd worn them out. then i'd buy new ones and wear them out. even today i can sing every note, every drum part, every solo from "st. steven" straight through to "turn on your lovelight". i can/could play them, too. i'd brought my drum set down to school, but my roommates had said uh uh we've got to study this 1/4, and so it being the Twang Age and all, i'd gone out and bought my first electric guitar——a single cut-away Les Paul Junior for 50 bucks. it would be worth around 500 now. i got the money working part-time at an antique shop called airflow junk, the owner paying me $10 a day under the table. unless he was high. then he would ask "have i paid you yet?" and i'd say "no". this would happen 2 or 3 times on a good day.

now, i would spend hours noodling along with their tunes especially the ones on the live album til i got the licks right, and was very impressed that a band of known drug abusers could play a song in 11/8 time and more or less come down on the 1 together. the music was only a simple major scale--book 1 page 1 lesson 1, but to me that was the beauty of it! so imagine my excitement when i opened the cleveland plain dealer's friday magazine and saw that for one night and one night only belkin bros. proudly presenting in their first area appearance...the grateful dead.

on d-day, 7 or 8 of us cut classes, piled into my vw, drove the 30 miles from kent to cleveland, coped with a flat tire no spare, and ran out of gas 2ice. see, my bug's 'fuel delivery system' had a hole in it and could only take an 8th of a tank at a time no gas gauge either. but we had anticipated all this. we'd left 6 hours before showtime so we could get lost. we had the proper amount of controlled substances in our bloodstreams. we knew there was a long journey ahead of us...after all, this was the dead!...so there would be adventures built in and ordeals to endure and little trials and challenges to experience and that we could and would triumph because when it came right down to it we knew this one shining truth--we were immune!! nothing could stop us.

and so of course we found a parking space right in front of public hall—proof! and so of course we bumped into the rest of the kent contingent in the lobby—more proof! and oohhh the stage was sssssooooooo beautiful could you believe all that equipment? they'd replaced the stock speaker cabinet grill cloth of their guitar amplifiers with tie-dye!! even the p.a. stacks were tie-dye!! even...hey! there they are! even the band was in tie-dye!!...and jumping like a willy's in 4-wheel drive.

but as good as it was, it was not good enough. i had to get closer closer i wanted to be the music not watch it it seemed so phony so square this arbitrary 4th wall concept separating 'band on stage' from 'people in audience' weren't we all one? and didn't we lose so much with the artificial divisions we were forced forced! to live with dictated mind you dictated! by a straight society who didn't know they just didn't know.

the hell's angels who had been hired as concert security had all gone to take a collective leak or gang rape a hippette or something and magic magic magic of magics there was an open door right by the stage no one was watching it the band had drifted into 'dark star' and they had fired a spotlight at the cut glass mirrored ball and pin-points of light creamed around the hall fast at first and then slowly slowed down and then aahhhh actually went the other way and no one else had seen the unguarded door but me it was for me there are no accidents. a path had been cleared and it was my duty and destiny to take it. so in i went and the next thing i knew i was in the wings on the stage and oh it was wonderful and this beautiful lady said hi to me and it was Mountain Girl! the Mountain Girl! a real merry prankster and she smiled at me and asked if i wanted a beer and i said yes and she showed me a whole wash tub a whole wash tub! of iced coors and i had one one of the band's beers! and then i had a few more and then i heard the unmistakable opening lines to "st. stephen" the patron saint of hungary i am half hungarian it was no accident there are no accidents and off we went and i knew the rumors must be true that owsley had really brewed up a batch of his finest and had put it in a mason jar and before each show garcia would dip his fingers in it it's true i was there it sounded like it anyway and i was it and i sang along and danced and we worked it we that's right we! we worked through the whole 2 sides of the album and i was the band the band was me and pigpen lurched into "lovelight" and i sang along and then i grabbed 2 empty beer cans and i started playing when the percussion breaks came right on cue i knew where they were i was on jerry's side of the stage and i was banging along and singing and dancing and staring at that wonderful face so deep lined and wise with that wonderful beatific look of pure knowing and i sang louder and banged the cans harder and that wonderful face and it's halo of hair slowly it took forever drifted floated over to me to me and he was no more than a foot away i could smell the sweat and the reefer smoke on him and from out of that wonderful mouth and those twinkling eyes came at the top of his lungs WILL YOU SHUT THE FUCK UP YOU FUCKING ASSHOLE!!!!!

I sold my guitar back to the guy I'd bought it from for thirty-five dollars and lent my drums to my friend Jeff Miller. He didn't get to play them much. Three weeks later he was shot and killed by the Ohio National Guard."

from EASY LIFE, released March 29, 2014
Recorded in 1989 at my house in Centerport, NY, with the Tascam 244 for the 20th anniversary of the murders of four students at Kent State University.

Bandcamp Daily  your guide to the world of Bandcamp

Nightmares on Wax and Bremer McCoy stop by with their sublime new LPs.